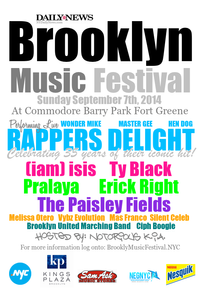 The Brooklyn Music Festival is designed to celebrate the accomplishments and achievements of New York City’s largest borough. In the seventeenth century when Dutch colonist first settled in New York no one could have imagined or conceptualized the multi cultural metropolis we’ve come to know and love as Brooklyn.

The twentieth century introduced the Dodgers to Brooklyn and now Brooklynites are ecstatic over the newly acquired Brooklyn Nets. The Brooklyn Music Festival at Commodore Barry Park (FORT GREENE) is yet another opportunity for this beloved borough to shine and also to ignite excitement and enthusiasm in a safe and positive atmosphere.

Novas Entertainment Group NYC (NEGNYC) credo is quality, affordable entertainment delivered with a high level of integrity and professionalism. Sunday September 7th 2014 will be a fun day for patrons. It will also be a productive day for various event sponsors, vendors and non-profit organizations of the event as they will have the opportunity to interact with thousand of enthusiastic fans.